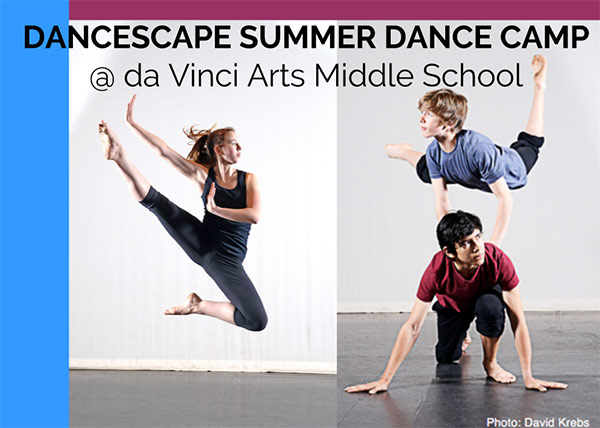 The first week of PPS summer vacation there will be an all day dance camp at da Vinci Arts Middle School. The week-long camp from June 19-June 23 will be five full days of Jazz, Tap, West African, Hip Hop and dance conditioning classes; with the option to add-on a Ballet class at the end of the day.

Space is limited and the camp always sells out. Registration forms will be processed on a first come, first served basis.

Students who are not currently enrolled at da Vinci Arts Middle School are welcome to enroll as long as they meet the minimum requirement of one-year of tap and jazz. This marks the 19th annual year of this incredible camp brought to you by Dancescape After School Dance & Summer Dance Program.

Éowyn Emerald Barrett is a Canadian born choreographer, dancer, and teacher, currently creating in Portland, Oregon. She was selected by the Times of London as “a talent to watch.” Her company Éowyn Emerald & Dancers are based in Portland, OR, and have toured internationally multiple times to the Edinburgh Festival Fringe. The company is planning to relocate to Aberdeen, Scotland in the summer of 2017. Éowyn is a graduate of the University of North Carolina School of the Arts and is the creative producer of Pacific Dance Makers, a biannual show in Portland, OR that highlights work by choreographers from across the Pacific region. Éowyn is currently on faculty at BodyVox, Columbia Dance, Dancescape, The Portland Ballet, and Wilson H.S.

Sarah Fuhrman is originally from Portland, OR, and trained with The School of Oregon Ballet Theatre under Haydee Gutierrez and James Canfield. She spent time in St. Petersburg, RU for additional training with the Mussogrsky Opera and Ballet Theatre. Sarah joined Oregon Ballet Theatre as a company member and danced corps and principle roles. She moved on to dance with Colorado Ballet, State Street Ballet and most recently danced principle and soloist roles with Nevada Ballet Theatre as well as acting as rehearsal assistant for the company and academy.

Karida Griffith (karidagriffith.com) is a Portland native who has established an extensive career in New York as a professional dancer, teacher and choreographer. Her credits include the Rockettes, Boardwalk Empire (HBO), Cirque du Soleil, and others. Karida was also on tap dance faculty at Broadway Dance Center in NYC, and a Professor in Pace University’s cutting-edge BFA Commercial Dance Program.

Kemba’s multifaceted dance style continues to inspire her students to be fierce and dance with their heart and soul.

Derrell “Sekou Soumah” Walker is a Portland, Oregon native and a strong presence in the West African Drum and Dance community. He is the perfect blend of drum and dance; Western and West African. He effortlessly inhabits the highest levels of Mandingue drum and dance, and blends these skills with his American roots and a deep knowledge of the Mandingue culture.

The embodiment of these traits combined with a natural gift for teaching and mentoring make Sekou one of a kind. Africans and non-Africans alike respect him worldwide. This is reflected in Sekou’s starring as both a dancer and a percussionist in Moustapha Bangoura’s Tinkanyi instructional dance videos in 2003. In 2004 Sekou received his teaching certification from Mamady Keita and Tam Tam Mandingue, followed by a teaching diploma in 2008.

Sekou began his dance career in 1998, after several years of training as an athlete. The path from athlete to dancer is an unusual one. As a result of thousands of hours spent training and competing in track & field and baseball, Sekou possesses a grace and power in dance that is rare, particularly amongst American-born African dancers. Sekou continues to refine these skills through performing and teaching dance all over the United States and internationally in countries including Scotland, Singapore, Mexico and Bali.