Prelude to the Edinburgh Fringe 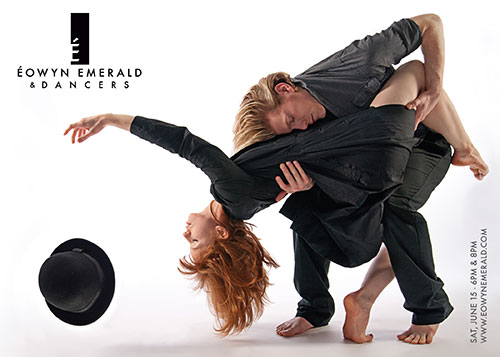 The dynamic Portland choreographer, Éowyn Emerald will make her European debut this August at the renowned Edinburgh Fringe Festival in Scotland. Enjoy an ambitious evening of dance that is physical, poetic, technically demanding and emotionally complex while directly supporting the first international tour of this rising choreographer.

Online ticket sales have closed, but there are still tickets available at the venue for both the 6pm and 8 pm shows. Cash, check or credit cards accepted.

Anouck Iyer
Anouck has been working in film/video production independently and commercially since 1995. She began her filmmaking career at Rhode Island School of Design and at California Institute of the Arts, where she specialized in experimental film and animation. Her independent films have garnered awards and recognition nationally and internationally at film festivals and museum screenings, including SXSW, Sundance Film Festival, and Museum of Modern Art in New York City. Commercially, she has worked as an animator for the TV series Home Movies (season one), set fabricator on broadcast commercials for Mandalay Bay Casinos and Nickelodeon, and motion graphics artist for Sesame Street interactive, Channel One News, Moulé, and Wieden+Kennedy clients Nike, Ivory, EA, and Coca-Cola.

Adam Hurst
Award winning and World Renowned cellist and composer Adam Hurst uses the cello as a solo melodic voice and creates passionate and emotive musical poetry that digs straight to the soul. The original music of Adam Hurst is at once haunting, ethereal, evocative and romantic. His music has hints of Arabic, Indian, Eastern European, Native American, Celtic traditions while being completely his own. He has performed throughout the US and in Europe and has been commissioned to compose and perform original work for ballet, belly dance, and contemporary dance. His music has played on various radio shows around the world including Echoes on NPR stations in the US. His recordings have been used in independent films, documentaries and art films. Adam Hurst’s compelling live performances are not to be missed.

Mr. Hurst has released twelve CDs of original music. His most recent, called “Obscura”, is a collection of songs for Cello, Tanpura Drone, and Frame Drum. Commissions include: Broken Sparrow~ a ballet choreographed by James Canfield for the NWPDP, in which Hurst composed the entire score and performed live on stage at the premier. Midnight Waltz~ an original piece for cello and accordion composed for the Portland Vampire Ball. Anima~ an independent feature film by Craig Richardson.

Adam Hurst studied cello at Skidmore College while in highschool and Brown University while in college. He holds a BFA from Rhode Island School of Design (1997). He taught cello at Providence College as an adjunct from 1998-2002.