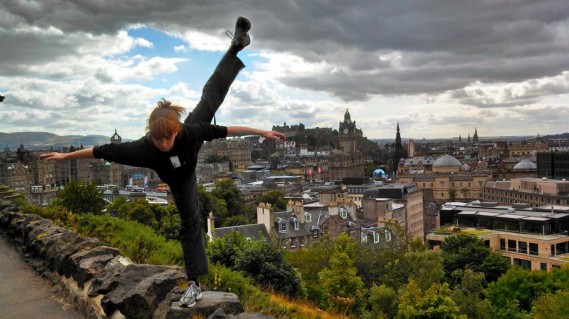 Reviews of our Edinburgh shows

3 times Critic’s Choice in The Times of London for What To See Today at Edinburgh!!

Éowyn Emerald and Dancers at Greenside at Royal Terrace, Edinburgh

One of my hot tips in this year’s Fringe dance programme is Éowyn Emerald Barrett, whose young, Portland, Oregon-based company is making its second consecutive visit to Edinburgh. Barrett has crafted a pretty seamless, satisfyingly varied suite of seven short dances for herself, Jonathan Krebs, Josh Murry and Holly Shaw. What I like about her work is both its attention to kinetic detail, and how a range of emotions are never obviously conveyed. The hour-long performance also strikes a fine balance between humour and sobriety.

The quality of the dancing shines through too, whether in a duet for Barrett and Murry centred on the exchange of a jacket and hat, or a trio in which Krebs joins them for what could be construed as an anti-war statement. It is precisely this level of ambiguity that is most telling about Barrett’s dance-making. Shaw also has her moment in the spotlight via a slow, seductive jazz-influenced solo. All four dancers soar in a finale that confirms Barrett as a talent to watch.”

Éowyn Emerald and Dancers made a successful debut at last year’s Fringe and are back again this year with another varied programme of short dances. The company is based in Portland, Oregon, but members of the group trained in some of the top dance schools and universities in North America and performed with a number of different companies before coming together to work with Éowyn. Their varied backgrounds enable them to bring a wealth experience to their current performances and their time together has created trust and understanding between them.

The dances are created and choreographed by Éowyn. Not until after the dancers have learned a piece does Éowyn reveal its stimulus and significance for her. At that stage dancers discuss their own understanding of the work with her and together they discover some of the meanings a piece might have. Dancer and choreographer do not have to agree on a single meaning. As these are abstract pieces members of the audience can similarly place their own interpretation on what they see. There are no right and wrong answers as to what the dance is about.

Each of the four dancers demonstrates a solid grasp of the art of movement and the ability of the body to express emotion. The opening quartet demonstrates the physicality and almost-gymnastic abilities of the group. The staccato moves seen are beautifully contrasted in the graceful and flowing movements of the closing piece, some of which derive from the ballroom. Between these two are a number of solo dances and works for pairs in which both the men and women demonstrate strength and elegance.

The dance space in this intimate venue is used fully and the audience is brought into close proximity with the performers. This is an advantage, as are pieces concern deep emotions and we are able to see expressed on their faces of the dancers. The varied costumes, lighting and music are well matched to the choreography and work in harmony with each other.

Éowyn Emerald and Dancers are an accomplished group, making a dynamic and refreshing contribution to dance at the Fringe.”

There is such a dearth of high-quality modern ballet or contemporary dance at the Fringe that when you find it, you want to shout from the rooftops. So this is a call to all those looking for such a thing to head to Greenside, where Éowyn Emerald and her troupe have it in abundance.

Hailing from Portland, Oregon (a known hotbed of creativity in the US), the company not only has a roll call of technically strong dancers, but a repertoire of diverse choreography with which to show them off.

Although there are just four performers in this show, including Emerald herself, they somehow manage to fill the space – and time – as if there were more of them.

Each dancer has their own unique quality, and is a genuine pleasure to watch – able to hold their own during solo moments, then join the bodily fusion of a group piece.

Despite the close confines of the Greenside stage, all space is used efficiently. Lifts, leaps and tumbles are tightly executed, and the mood shifts from playful to sensual to serious.

Aside from the opening work, which is performed in almost complete silence, Emerald’s musical choices add a real richness to the choreography. From the sultry jazz of Duke Ellington to lesser known artists, there is never a moment when the aural entertainment isn’t as good as the visual.

In a consistently strong programme of six works, none triumphs over the other – but a special mention must go to Blurred, a captivating duet performed by Emerald and Josh Murry. Climbing around, through and over each other’s bodies, a bowler hat passes between them, giving form to the emotional exchange that ranges from tender to sexually charged.

Emerald’s troupe is a real Fringe find. Enjoy them, then spread the word yourself.”

What a surprise and pleasure it was to come upon this small but gifted company from Portland, Oregon. Eowyn Emerald Barrett has crafted an unpretentious and pretty seamless 50-minute collage of dances with considerable care. Her choreographic signature is sometimes athletically refined without feeling slavish to technique.

Maybe it’s because she and fellow performers Jonathan Krebs, Josh Murry and Holly Shaw tend to put their virtuosity at the service of a given work’s underlying emotional content. They dance with enormous surety of purpose. Whether playful or serious, the dances themselves are often marked by an intriguing ambiguity and invariably accompanied by astutely chosen and (to this writer) mainly unfamiliar music.

A quietly charged, admirably intricate duet is centred on the passing on of a jacket and hat. There’s a telling trio that might well be about the personal cost of war, but is never for a moment obvious about its theme. The show climaxes with a quartet composed of glancing and then soaring component parts that plays out like a romance with dance and life itself. By the end I was left wanting more, but only in the best sense.”

We still are asking for your help in making this tour a success – please visit this page for information on how you can help. 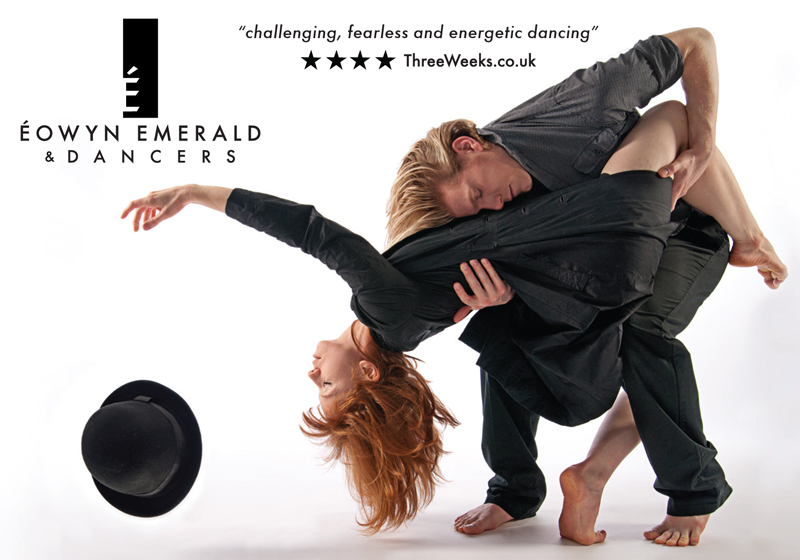 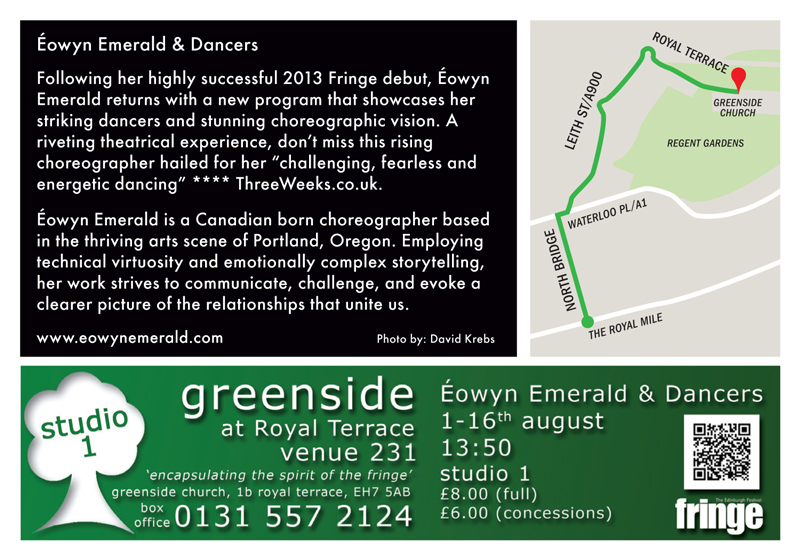